It kind of looks like it was a total con job.

But you can bet Niagara Falls Mayor Paul Dyster and USA Niagara chief Chris Schoepflin -- who together saw to it that Idaho developer Mark Rivers got $450,000 of public money to put on his Holiday Market -- will spin it as a rip-roaring success.

But one look -- on opening day, for instance, Black Friday, the biggest shopping day of the year -- indicates that this Holiday Market will be a total bust.

And Saturday was even worse.

A holiday only for its developer, Mark Rivers. 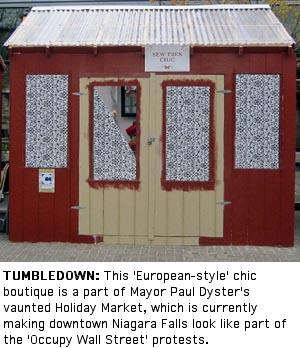 Now, first, to answer the question readers ask: What is this Holiday Market anyway?

Aside from the hype -- the promise that it would be the largest European-style Holiday Market in the country, with 250,000 people flocking from around the region or the world to attend, replete with winter wonderland events, adding growth and life to downtown Niagara Falls and filling up hotels during the holiday season -- it is in reality four concerts, a small ice-skating rink, 35 ramshackle wooden booths, akin to tool sheds, and tents occupied by a motley group of vendors, along with a 30-foot-tall Christmas tree, some Christmas decorations and a couple of scattered events in and around the park.

Funny, too, we were originally promised much more.

We were told the ice-skating rink would be the largest in Western New York. It is, in fact, not as large as a regulation hockey rink. It's not only small but, oddly, surrounded by a moat of mud requiring anyone who enters to trample through mud to get on ice.

We were told that 80 top-notch vendors would make this market grand. On the first day of this 37-day event, there were 23 vendors. Apparently there is construction going on and seven more are yet to come -- making a total of 30.

Rivers told the media he will have 50 -- which may be true -- but apparently these will not be here all at the same time, making the largest total around 40 at one time, or half the promised number of vendors.

Funny, too, Rivers could not get the event ready in time. During the first few critical days -- when the curious public comes and sees and spreads the word -- the place looked more like a construction site, with sawdust, debris and piles of cheap plywood, than a fancy European-style market. 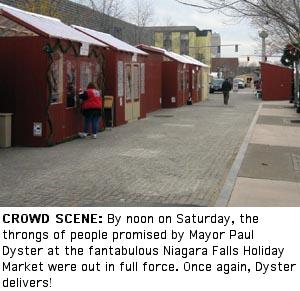 Rivers' strange remark about his failure to open in time was, "Listen, we're here for 37 days; if we're a few hours late getting started, we'll get by."

It will be very interesting to see, after a week or two, if there are more or less vendors than are there now.

Judging by the initial attendance, the poor design and appearance -- it looks like a Mexican flea market -- and the poor reaction of the public, some vendors might close early and leave before the Holiday Market concludes on Jan. 1, for simple lack of customers.

The small number of vendors, some of them in mobile trucks, also makes it appear that there will not be critical mass. There are not enough combined merchant offerings to make this Market a destination shopping experience.

Rivers is, at the last minute, trying to get more vendors -- and is now accepting mobile food trucks.

Funny how tunes change -- before and after one gets public money.

Last August, Rivers said that he would only accept the cream of top-notch vendors.

"This is not a carnival or a weekend street festival with funnel cakes," Rivers told the Niagara Gazette in August. "It is a world-class market and event that is already attracting the very best retailers and artisans from the region and beyond. We expect to sell out this opportunity for vendors." 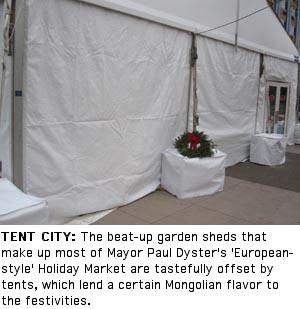 Rivers, of course, did not sell out. Not even close. Now, he says, even the food trucks that Buffalo doesn't want are welcome.

Rivers told the Gazette, "If they don't want them in downtown Buffalo, they're welcome (at the Holiday Market) in downtown Niagara Falls."

The first and last impression one gets is ramshackle and makeshift. The roofs on the huts are corrugated plastic or fiberglass, the flimsy kind you sometimes see on the patios of cheap homes. There are tents and extension cords all over the place, in clear violation of New York state building code, connecting some of the booths and tents to electrical power.

The place is far from picturesque. And while comparisons are odious, it looks more like Occupy Wall Street than a European-style Holiday Market.

The Reporter spoke with numerous people who had come to see the Market.

"It's weak, stupid. Nothing to do," said one observer, who seemed to echo what almost everyone said about it.

"There were no scenic views of Christmas-related displays. Not many lights; it was dark at night," said another among the scanty crowd.

According to Rivers, there would be an average 7,000 people coming per day to his Holiday Market in order to equal his 250,000 estimated visitors over the 37-day season.

He's since changed his tune. He told the Gazette on opening day that he hoped the Market would attract "thousands."

A generous estimate might be 1,000 in a day. If you went to the Factory Outlet Mall -- which is not funded by taxpayers -- there were thousands shopping there at any of those times.

But what can you expect? There was little to attract shoppers or keep them.

As far as vendors are concerned -- there was one who sold Christmas trees, another sold ornaments. There was a small art gallery and some souvenir stands, small toy stores, hat and scarf stores, a purse store, a coffee shop, a small American food store, a candy shop, two wineries, a jewelry store and several vacant spots.

The real issue, however, is that the public put up $450,000, and Rivers was supposed to put in, through various sponsorships or with his own money, another $450,000.

The Reporter learned that Rivers got $10,000 from the Bridge Commission and $15,000 from Global Spectrum, which runs the conference center.

That means he received more than $475,000 -- not counting what vendors paid him to be there, rent on skating, concert ticket sales, etc.

What we calculate is there is perhaps a $35,000 ice-skating rink, $75,000 in plywood huts and tents, $10,000 in Christmas trees and decorations, and the cost of four concert acts -- which will be paid-admission events. These are Aaron Neville, the Canadian Tenors, the Buffalo Philharmonic Orchestra and Elisabeth von Trapp. These are certainly not top-priced acts and book, I am told, for between $10,000 and $15,000 each.

Adding this up means there might be about $180,000 invested.

In short, even if this Market loses money, Rivers will walk away with a handy Holiday profit, courtesy the taxpayers.

Hopefully, someone from Schoepflin's staff will be prepared to report on who and how many actually got jobs from the Market, and show with statistics, and not with the usual pure baloney, how much parking revenue and sales tax was generated.

Attendance figures and how much was generated in ticket sales for the four concerts and who got the money will also be revealing.

City Controller Maria Brown, of course, should demand from Rivers a complete report detailing what he did with the public money. The mayor should make this report available to the public.

It will not be sufficient for the mayor to offer his usual anecdotal accounts of how great his projects are -- like he does with the Hard Rock concert series, where the public pays the billion-dollar Hard Rock Corporation to put on concerts for them to make a profit, and the mayor pulls numbers out of his hat to tell us how profitable it is for everyone. 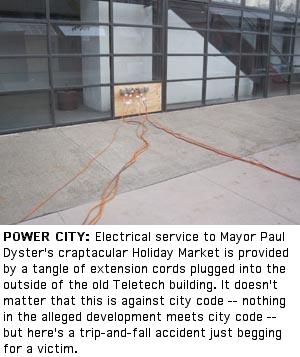 The money the public paid for this Holiday Market was real. The report Brown makes should be exact.

In the end, the public should not be satisfied with Dyster's imagination, exaggeration, or cock-and-bull stories told in turn by Rivers, Dyster and Schoepflin to save face for what will undoubtedly be a grotesque and abysmal loser.

Councilman Bob Anderson was one of the few in city government who saw this Holiday Market as a waste of public money right from the start.

He asked the mayor, "Why is an entrepreneur coming to Niagara Falls asking you for $450,000 and not bringing his own money, if this was such a great plan?"

Anderson told the Reporter, "The mayor wouldn't listen to me."

Newly elected council member Glenn Choolokian had refreshing viewpoints, and since he can provide the critical third vote on the council, his rational views might spell an end to the mayor's ceaseless boondoggles with public money.

"I'm a firm believer that if someone wants to come in with their own money, that's fine. I owned businesses in the past and I saved up and opened up my own businesses with my own money. Look at this endeavor. The city puts up the money, the developer takes a couple hundred thousand up front, and even if it is a bust, he makes out.

"To me it's another group taking advantage of Niagara Falls," he said.

Not all were losers, however -- Dyster got ample mileage out of this Holiday Market. He used its upcoming event status frequently in his campaign to show that he makes things happen in Niagara Falls.

He was so very lucky that the Market came after and not before the election.

And Rivers got what he needed -- hundreds of thousands of your money.

In the end, somebody better be able to show what the public got for paying for this travesty.