Santa Claus is coming to town. Or trying to.

Only this isn't the Santa Claus who gives gifts.

His name is Mark Rivers from Ellicottville, and his plan for a downtown "Holiday Market" -- a real holiday for Rivers at least -- was tabled by the Council last week.

It was a red-letter day for the city, however, as two Council members, Sam Fruscione and Robert Anderson, put the skids on Mayor Dyster's spendthrift plan to gift $225,000 of public money -- from casino funds -- to Rivers, from Ellicottville, and lately Boise, Idaho.

The councilmen halted the plan after they learned from City Controller Maria Brown that almost all the casino money collected during the Dyster administration, including $7 million currently on hand, is either committed or already spent. 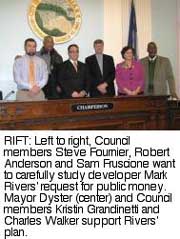 Dyster spent millions on various studies and grants performed by or awarded to campaign contributors who happen to be from Buffalo -- architects, engineers, planners, lawyers, developers, and what not.

No projects have actually been built.

Brown shocked the Council and the public when she reported there was only $200,000 of uncommitted casino money left.

Rivers, an elegant huckster with a glib tongue, said he wanted to build a 36-day-long, temporary market on Old Falls Street this holiday season.

The indoor-outdoor market, Rivers said, would cost around $1 million and calls for 80 makeshift booths for vendors offering foods and goods.

The devil came out a little in the details.

According to the Niagara Gazette, Rivers explained that actually only $100,000 would be spent to develop the physical booths for vendors. Another $75,000 would be dedicated to the development of a proposed ice rink, and perhaps $100,000 on ornaments, Christmas trees, bonfires, carriage rides and other holiday elements.

Of the million allegedly to be spent for the Holiday Market, only $275,000 goes into what developers call "hard costs" -- the "bricks and mortar," the physical building of a project.

The rest -- $725,000 -- would be spent on "soft costs": planning, drawing, marketing, administration, and perhaps a few percentage points slipped into this pocket or another as fees, commissions, salaries, etc.

The $175,000 remaining in public money is Rivers' to keep for marketing and administrative salaries, etc.

According to news reports in the Boise Guardian, Rivers is a man who favors private/public partnerships, especially when the public comes up with all the money.

The Guardian wrote it is hard to decide whether Rivers is "smooth" or "slick." In Niagara Falls, Rivers told the public, "I have a lot of passion and affection for Western New York."

It would be a lot more believable if Rivers wasn't so passionate about getting public money.

He sounds like the weavers in "The Emperor's New Clothes" who promise to weave a cloth so fine and subtle that, at least for fools, it will seem just like what Rivers said: "something that doesn't exist."

"We start with a good idea. We execute well. We have good partners. We dream big and we execute," Rivers said.

Good partners, indeed. The public comes up with the money.

Rivers dreams big. But then who doesn't "dream big" when it's other people's money?

Rivers waxed poetic when he called his idea "the perfect holiday recipe: one part German christkindlmarket, one part Norman Rockwell Main Street, and one part Rockefeller Center, that will mix and create an authentic, extraordinary winter experience."

He may have forgotten to mention one ingredient -- a bundle of public money tucked into Rivers' pocket.

Rivers claims his firm will not make a profit on the event, and any money left over would be pumped into the next year's project or returned to the city.

If that were true, why is he doing it?

Dyster and Rivers claim that 250,000 people will come to the market.

If these 250,000 people each spend an average of $20, Rivers' operation will realize $5 million in gross revenue.

At the risk of offending socialist sensibilities, where government taxes the middle class to give money to wealthy developers, may we ask, if the project is so good, why can't Rivers use his own money, if he has any?

And keep all the profit.

Contrary to Dyster's suggestion that Rivers' "Holiday Market" has a public benefit, since it will bring business downtown, it is quite possible that Rivers will snatch important Christmas business away from local, middle-class, taxpaying merchants who are not funded by public dollars.

Dyster said he had been working on the project for about six months, apparently with Rivers and USA Niagara.

Dyster seemed disappointed that Anderson and Fruscione led the Council to postpone a decision on the project last week.

He should not have been disappointed.

After all, Dyster worked on this for six months. Yet, up until the day of the vote, the Council had not been shown the most basic budget or breakouts of the project.

Council members had not been invited to any meetings with Dyster and Rivers, and were not briefed until Rivers arrived last week and made the rather surprising announcement that the "hard costs" of the project would be less than the public money invested.

Anyone who knows anything about development knows "soft costs" are notoriously difficult to pin down.

In fact, they are called "soft" because, unlike "hard costs," they are not always necessary to a project.

Soft costs can appear as real investment, but are sometimes "phantom" -- not really invested at all.

Even on projects where allegedly a developer does not make a profit, it is not uncommon that "soft cost" money is spent and shown on the ledger as real costs, but spent with affiliated or related companies, who mark up services, subcontract any real work at substantially lower costs, and in effect, divert hidden profits to the developer -- through his affiliated companies.

If there is no contractual prohibition against it, it is entirely legal.

It is not like "hard costs," which are actual construction costs -- materials and labor, easily quantifiable -- that have to be invested in a project.

Normally soft costs make up about 10 percent to 20 percent of any project.

Here they are a wildly disproportionate 72.5 percent.

Councilman Robert Anderson wisely told the Reporter, "I'm not going to approve giving (Rivers) our money with no proof of anything. That's just not common sense."

The mayor, in turn, is like someone who does not know how much money is in his own checking account. Imagine trying to give away $225,000 when there is only $200,000 of casino money left.

Imagine expecting the Council to approve it without a detailed budget and better information than the word of a glib developer and his slick brochure.

In fact, Grandinetti told Wooten that she is so supportive that she is "over the moon" on this project. Fruscione, Anderson and Council member Steve Fournier Jr., conversely, seem intent on looking hard at these "soft costs."

Meantime, Rivers, grasping for public money, is lobbying furiously and contacting Council members, the mayor and the media.

Fortunately, Fruscione, Anderson and Fournier have had considerable real-life business experience and can exercise mature judgment.

They, as the majority voting bloc of the Council, will decide whether or not Mark "Santa Claus" Rivers -- who claims he is doing it all because he is "passionate" about "us," but with his gift bag overflowing with our money --is really coming to town.