DOES DYSTER CARE ABOUT HISTORY, OR ONLY ABOUT HIS PROPERTY VALUE?

As readers know, homeowners on Orchard Parkway and Chilton Avenue, thanks to Mayor Paul Dyster, had their homes registered as "Historic" with the New York State Board of Historic Preservation and the National Park Service.

To accomplish his task, the mayor, using public money, hired his campaign contributor, architect Clinton Brown, as a consultant, for the sum of $13,150, to secure the listing of these two streets on state and national registries as a historic district.

The two streets -- each one block long, and including all of 88 homes -- were successfully registered last fall.

The registration offers benefits, particularly tax credits that allow for as much as $10,000 in reductions in federal and state income taxes when a homeowner makes certain exterior repairs to his property.

Happily for the mayor, as he told the Niagara Gazette, he was planning to put a new roof on his house. The mayor now can get his roof done for substantially less.

A possible boost in property values for the two streets is also something the mayor can point to as he courts re-election.

As campaign contributor Brown said, "Historic districts retain and enhance their value more than other undesignated parts of the city."

Dyster -- who, unhappily, has one of the least historic houses on his street -- should see a boost in his home's value, now that it's part of a historic district. His home was the last to be occupied on Orchard Parkway, having been there since the late 1950s.

Dyster has denied any connection between his home being on Orchard Parkway and the city becoming involved in the historic district effort. He said these two streets happen to be most worthy of historic designation in the city. 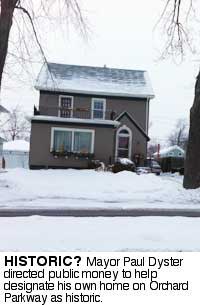 Referring to himself in the third person, he told the Niagara Gazette, "It's not because the mayor lives in one of those neighborhoods. It's a pure coincidence."

Some have argued that these two streets are far from the most historic. Many neighborhoods can boast of older, more historic homes.

Most homes on Chilton Avenue and Orchard Parkway were built in the late 1920s and 1930s.

A number of neighborhoods with older structures -- indeed some 19th-century gems -- are either on the demolition list or likely soon to be there.

Dyster's administration, however, sought only his own street and the one next to it.

He did it craftily too.

It was sprung on the Council -- with the mayor personally placing it on the agenda -- in September 2009, the night before the primary election, when Council Chairman Sam Fruscione and others were busy campaigning.

None of the neighbors were informed either.

Sue Teller, one of Dyster's neighbors, told the Reporter, "Orchard Parkway homeowners, residents and members of an active and dedicated block club knew nothing about this application until after the fact."

Of course, that is not to say that Orchard Parkway is not even slightly historic. It was developed from an old orchard, part of the Whitney farm, with what some might call an early version of the suburban model -- every home having a garage, and with trees and a central grass mall creating a parklike setting.

Orchard Parkway is much like any number of streets in the DeVeaux neighborhood of Niagara Falls.

That hit a temporary snag when a majority of Dyster's neighbors made it clear they do not want it. In response to a survey conducted by members of the Orchard Parkway Block Club, 64 of 65 homeowners contacted signed a petition vigorously opposed to Dyster's plan for local historic designation.

Once local designation is approved, when a homeowner applies for a building permit, instead of being able to walk out of City Hall with a permit to start work, the application is referred to the Historic Preservation Commission, a group of volunteers appointed by the mayor and the Council.

The commission then, within 90 days, will approve or deny the application, or call for a hearing where the public is invited to weigh in on whether the repair plan is suitable according to their historical aesthetics.

It is not surprising Dyster's neighbors hated the idea.

According to Niagara Falls municipal law, local designation will grant Dyster, through his legal and code enforcement departments, power to keep his neighbors' properties historic and well kept.

If, in the judgment of the Historic Preservation Commission, a homeowner lets his "property fall into a serious state of disrepair (or) deterioration (the homeowner) is guilty of an offense punishable by a fine of $250 per day and imprisonment for a period not to exceed fifteen days, per day of violation or both."

Although socialist in its ideals, local designation can have a positive impact on property values by requiring owners to make repairs, while preventing them from making ugly, modernistic changes to the exteriors of their homes.

If you have a clapboard house, for instance, it is unlikely you will be permitted to cover it with vinyl siding, or add a garage or an addition that would change the exterior appearance, or add new block windows for the basement. You generally cannot paint your house a different color without approval.

"It gives some security that the properties in your neighborhood are going to be maintained with some kind of historic appearance," said former city historian Tom Yots. "That's the advantage of the local designation."

And it could be a big advantage for Dyster, whose own home should rise correspondingly in value if he gets local designation. His administration then could force his more slovenly neighbors to upgrade their homes based on government-enforced historic standards.

With local designation, Dyster can conceivably improve his whole neighborhood, which in turn will have a decidedly positive impact on his own humble abode.

Local designation, however, requires Council approval. That is not likely to happen with the present Council. Fruscione has vowed to block the effort as long as a majority of neighbors are opposed.

In the end, this relatively minor item in city governance reveals a great deal about the character of the Dyster administration.

The mayor directed public money to be used to create a historic district -- two narrow, short blocks of not terribly old homes -- that just happened to include his own home. One suspects he included Chilton Avenue only because a historic district requires more than a single block-long street.

He worked stealthily to accomplish his objective. The result was that his house -- without the neighbors weighing in on it -- was included for historic designation.

He claims it was pure coincidence, despite the fact that he himself put the item on the Council agenda. The benefit somehow accrued to him, while he tried to appear solely interested in history.