HOLIDAY MARKET NOT LIVING UP TO PROMISES

Last week, it was widely reported that more than 20,000 people visited the Niagara Holiday Market over Thanksgiving Day weekend.

The Market -- which consists of 33 vendors in wooden booths and tents along Old Falls Street, along with an ice-skating rink and some special events -- is a publicly funded venture meant to bring extra life and business to downtown Niagara Falls during the holiday season.

If the visitors number of 20,000 for its first three days is true, the market would be on track to meet its previously projected 250,000 visitors during its 37-day existence.

There is some doubt, however, whether the 20,000 estimate is accurate. 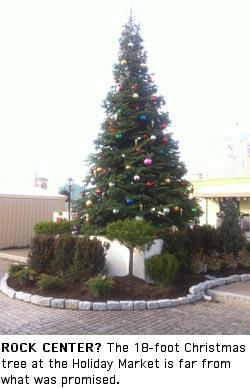 The Niagara Falls Reporter assigned a special correspondent, Johnny Helms of Niagara Falls, to go to the Holiday Market several times each day to estimate the number of people in attendance.

Helms' full-time job is in the tourism industry in Niagara Falls. His daily duties during the tourist season include the managing, serving and counting tourists, ranging from 50 to 1,000 people at a time, to determine compensation for tour guides who bring tourists to his employer's food court and shopping center.

Since the tour guides get paid based on the number of people they deliver to the food court and retail vendors, Helms has to count people carefully.

By taking Helms' estimates of crowds, recorded at various times during the day, and averaging them, the Reporter is in a position to make educated estimates of the the number of visitors to the Market each day.

For example, on Friday, Nov. 25, the opening day of the Holiday Market, Helms recorded between 45 and 110 people at four times he made on-site estimates. The average of the four is 63 people.

Before one can make a daily estimate of how many individuals visited, one has to make an assumption about how long the average visitor stays.

If it is assumed visitors stay for an average of one hour, and the average number of people at the Market on opening day was 63 people, then 567 would be the number of estimated visitors for Friday (63 x 9).

If the reader believes that our one-hour average estimated stay is too short, then he need only make the crowd total lower, since some of those who stayed longer would have been counted twice in our estimates. 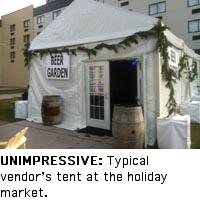 On Saturday, Nov. 26, the second day of the Market, using this method, Helms' numbers suggest the Market averaged 265 visitors per hour, for a total of 2,385.

On Sunday, the numbers dropped significantly. Crowds averaged 75 for the eight hours the Market was open. Total: 600.

The Niagara Falls Reporter estimates that 3,552 visitors came to the Market during the Thanksgiving Day weekend. What Rivers apparently claimed and much of the media reported (20,000), as opposed to what we believe actually happened (3,552), suggests that Rivers overestimated attendance by 563 percent.

After the Thanksgiving Day weekend, attendance dropped off dramatically.

"Very dead most of the day. Usually between 6 and 20 people there. All vendors were open. Around 6 p.m., there was a performance by figure skaters at the ice-skating rink. Seventy-five people were there to watch.

The Reporter estimates of total visitors to the Holiday Market are:

This is drastically less than what Rivers claimed before he got $450,000 of public money to develop this event.

On March 4, the Buffalo News reported, "Rivers said his research with tour operators and others in the tourism field produced an estimate of 250,000 visitors during the 36-day duration of the market."

Rivers seems to have over-promised attendance by 932 percent.

Not only in attendance numbers, but throughout the whole development of the Holiday Market, Rivers seemed to promise more than he delivered.

In fact, this might be the reason for low attendance.

The Market is much less than what the public was promised and it is not the destination attraction it was promised to be.

Before he got the public's money, Rivers told the Niagara Gazette, "The market will include 80 vendors selling 'unique crafts, gifts and specialty food items.'"

Rivers promised 80. He delivered 33. He overpromised by 242 percent.

Before it opened, from his website, Rivers said the Niagara Holiday Market would be the "largest European-style holiday market and festival in the U.S."

Union Square Holiday Market in New York City has more than 100 different vendors. To be the largest, Rivers would need more than 100 vendors. He delivered 33. He overpromised by at least 333 percent.

One local magazine, which apparently took Rivers' word and sent no one down to actually see it, gushed about the tree in a recent edition of their publication. "Not far from the Conference Center and the (Holiday Market) vendors is something that seems almost ripped out of Rockefeller Center: a gigantic Christmas tree. Supposedly the largest in Western New York, it will be adorned with stockings, bulbs, other decorations, and lights in a locally broadcasted ceremony. The tree will be sure to shine light on the holiday spirit."

The Niagara Holiday Market Christmas tree is 18 feet tall. It rests on a four-foot box, making it 22 feet in height.

"It's our first Rockefeller Center in Niagara Falls," Rivers told the press when this midget tree was ceremonially lit.

"I think this will help get people in the holiday spirit," he added.

Rivers claimed we would get a Rockefeller-sized tree (70 feet). We got 18 feet. Rivers overpromised by 388 percent.

Lately, some people have been critical of my stories criticizing the Market. It seems like it is almost a civic duty to praise the market and allow wildly inflated numbers and untrue tales of its unprecedented success to go unverified.

For the record, I am not against the Market or Mark Rivers. I am against using public money for Holiday Markets. If Rivers put up his own money and gave us what we got, I would applaud him.

Had it been his own money, I would not care if he did not deliver everything he promised. Had Rivers used his own money, even if he failed, I would have applauded him for trying, because he failed on his own dime and every man has the right to do that.

But if it is a failure with the people's money -- taken from people by force through taxation -- and that failure was caused in part by overpromising (to get the money) and underdelivering (after one gets the money), then I believe this publication has a duty to call the whole deal into question.

Instead of cheerleading because a guy took $450,000 of public money and delivered an undersized project, we should carefully scrutinize income and expenditures and who gets the income and who pays the expenses.

Rivers said, when he was trying to secure $450,000 of public money, that the Market would cost $900,000 and that he would find sponsors or invest himself to cover the other $450,000 required for the project.

I doubt there is $300,000 all told into this Market, which means Rivers made $150,000 in profit from the public money alone. This was not what he promised, which was to match the public money with outside investment money.

Fruscione said he is going to demand "a complete report" detailing how Rivers spent the money, ask to have it reviewed by City Controller Maria Brown, and then make this report, along with Brown's observations, available to the public.

Fruscione said, "From what I have seen and what I expect to learn, Mr. Rivers is probably going to receive a large reduction, if not complete elimination, of funding, if he wants to operate this market again next year.

"Every (festival) project like the Hard Rock Concert series, the Blues Festival, and the Holiday Market have to be self-funded ultimately. Rivers has to be on the direct path to self-funding."