In the event Niagara Falls Mayor Paul Dyster is re-elected, a pro-Dyster or rubber-stamp City Council should -- at all costs -- be avoided.

A vote for Glenn Choolokian, running on the Republican, Conservative and Independence lines, rather than Alicia Laible in the upcoming council election will help accomplish an independent council with proper checks and balances.

A council is supposed to be independent, since it approves or disapproves spending on projects the mayor proposes.

The problem with Laible is that she was recruited to run by Mayor Dyster. To sweeten the prospects for her, Dyster secured an apartment for the 27-year-old at the Jefferson Apartments on Rainbow Boulevard so she could live close to him in Niagara Falls. Dyster also secured her a new job working in the HANCI offices on Main Street in Niagara Falls, so she could leave her old job in Buffalo at Horizon Health.

At her new, taxpayer-funded job, she is working under the direction of Jeff Patterson, who is also public relations coordinator for Mayor Dyster's campaign.

A new job, a new apartment, a run for office ... not that any of that is bad. Who can blame a young woman for trying to get ahead in life? 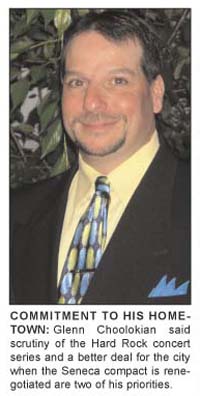 Choolokian, 44, conversely, is beholden to nobody. Married with two children, he and his family live on Garrett Avenue. He has lived in Niagara Falls his whole life. He has worked for the city of Niagara Falls and the Niagara Falls Water Board for almost 25 years, presently in charge of buildings and grounds.

A former Niagara Falls business owner in the 1990s, Choolokian owned and operated two nightclubs on Main Street. He became a Niagara Falls City Council member in 2004 in a special election but failed to win re-election in 2005.

"As I grew up," Choolokian said, "I saw a Niagara Falls that was successful. I blame 95 percent of the decline on politicians. The same kind of politicians win over and over again. They get in and nothing changes. We need somebody for the people."

Choolokian expressed concern that if Dyster and his "hand-picked" council candidate Laible are elected, she will become his swing vote.

"It hurts our city to have a rubber-stamp council," Choolokian said, "Normally, a council will support a mayor, maybe 85 percent to 90 percent of the time. But that small percentage, when something's wrong, an independent council is there to stop it.

"I have been here my whole life. I pay taxes. I have children here.

"If elected, I will not vote for out-of-town department heads. These people do not know Niagara Falls. They don't know the history -- a history that runs very, very deep. If these out-of-town people get the job, they stay and collect a check. If they lose the job, they go back home. That's not commitment."

On other issues, if elected, Choolokian says the taxpayer-funded Hard Rock concert series might be in for some pretty tough questioning.

"Niagara Falls should not be in the business of paying for concerts. If Hard Rock wants a concert, let Hard Rock pay for it."

Asked about the train station -- one of Dyster's projects -- Choolokian said, "Is it something that is needed right now? It might be good to have fast rail someday. But right now we have to worry about job development. Niagara Falls politicians never have the right priorities. A railroad station and Hard Rock Cafe will not save Niagara Falls."

"We should have passed a law like Las Vegas," he said, "Let Americans operate casinos here and let everyone pay taxes. The Senecas have everything locked up.

"You only have a certain amount of customers and the Seneca casino and their shops are grabbing it all. The guy that used to go for a cup of coffee in local businesses is now going to the casino and not only playing slots but getting coffee there, too.

"The jobs they are creating are not high-paying jobs.

"Everything was negotiated wrong. But that is what you get when you elect unqualified people.

"Seneca and Niagara Falls residents have to be on a level playing field. You can't blame the Senecas. They negotiated a sweetheart deal for themselves. Our leaders negotiated a terrible deal."

Choolokian is aware the negotiations for a renewal or cancellation of the Seneca compact will happen in the next four years.

If elected, he said he will make sure the city gets the right deal this time.

It is also a fact that Seneca has not paid its required slot machine percentage to Albany -- 25 percent of which goes to Niagara Falls, something like $40 million -- in two years.

If elected, Choolokian would fight not to allow Seneca to operate in Niagara Falls rent- and tax-free in violation of its compact.

"It is our money," Choolokian said, "But you hear nothing about it."

Referring to the mayor, he said, "You should make some noise. You should have some kind of plan to get that money. Without Niagara Falls, the casino would not have been here. But this mayor does not want to make any waves with Albany.

"Anybody who knows me knows I am not shy. I do my research. That's why this administration doesn't want me."

There is a joke current in Niagara Falls to illustrate Dyster's use of studies conducted by Buffalo campaign contributors.

A resident asks, "Mayor Dyster, how many million-dollar studies do you have to make with taxpayer dollars before you actually get something done?"

Dyster: Very good question. Let's do a study to figure that out."

Another version goes that after Dyster answers the original question, he asks Chief Planner Tom De Santis to pick someone from his list of Buffalo campaign donors to do a study on how many studies it takes to do a study.

De Santis with a wink says, "I think we need to hire one of our Buffalo guys to do a study just on the question itself."

"It has been like this for years," Choolokian says, although he admits Dyster has taken it to a new level. "Various people and groups pump money into whoever is running for office. There are locals here who could do the work. But out-of-town people contribute to this mayor and they get the work -- a lot of which is unnecessary. The council is supposed to make sure this does not happen."

As an example, he cited Dyster's plan to develop Jayne Park from a neighborhood park to a regional park, adding parking lots paved trails and canoe launches.

"The people of Cayuga Island moved there because it is secluded and on the water," Choolokian said. "They pay the highest taxes in the city. They don't want canoe launches. They love the park like it is.

"Do the paper trail. Contribution to Dyster followed by wasteful consultant money. And needless projects. Half the projects in some cases are consultant fees. But this is where Dyster and other politicians get their campaign money. Let me ask you, why would outside interests from Buffalo put money into local politicians where they don't live?

"I am running because I care about my city. I am not a back-door deal-maker. In the old days, you gave a handshake and that was golden.

"My father told me the one thing you can't fix is your name. That's how I live my life. I'm an old school guy.

"If I don't know something, I do my research. Once I tell you something -- my word is gold."

Young Alicia Laible's fortunes are tied to Dyster. But she says she will not be a rubber stamp for him. Maybe she believes it to some extent.

Now suppose you are a council member and a questionable vote comes up. Maybe you know in your heart that this particular vote is perhaps a shade more about helping a political ally of Dyster -- say, someone from Buffalo who contributed to his campaign -- and it is now his turn to be taken care of. Maybe the job is almost valid. Maybe the price is not too far afield.

You know it could be better. You know the consulting bids should be more carefully evaluated. But Dyster says, "I need this vote, Alicia."

What do you do? Bite the hand that feeds you?

Laible, in my opinion, will be part of the Dyster administration instead of part of an independent council.

Choolokian, on the other hand, offers experience and the critical third vote that could keep the council independent -- as it is legally enjoined to do.

For my part, I would strongly urge those who want better government, an independent council and more for local people to vote for Glenn Choolokian.