Paul and Becky Dyster are throwing a swanky soiree down in Buffalo March 24, and you're not invited!

The cocktail reception -- rumored to be the mayor's favorite sort of gathering -- will be held at the 34th-floor offices of the white-shoe law firm of Phillips Lytle LLP at Buffalo's HSBC Center. Tickets for the posh event are a whopping $250 per.

It would have been difficult to hold such an event in Niagara Falls, the city where Dyster is mayor, and where 67 percent of the children attending public schools live in households that are below the federal poverty level.

Let's face it, Paul and Becky couldn't have their wealthy Buffalo patrons driving to Niagara Falls, where Buffalo Avenue, Portage Road and other main thoroughfares look as though they'd recently been shelled by the Taliban. Well-heeled campaign contributors tend to get a little bit testy when falling into a pothole results in a flat tire or a snapped axle. Those Porsches, BMWs and Mercedes cost money! 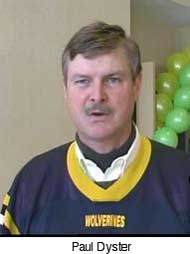 And God forbid that the city's out-of-control crime rate might manifest itself in the mugging of some high-society dame.

No, after careful thought, the mayor and Mrs. Dyster apparently decided not only that they didn't want the booze-soaked blowout held in Niagara Falls, they didn't even want anybody from Niagara Falls to come. Not only do you need the $250 to get in, you also need one of the engraved invitations depicted on this week's front page.

We've got a half dozen of them lying around the Reporter offices, brought in to us by bemused rich people of our acquaintance.

Dyster has been a wholly owned subsidiary of the Buffalo interests since before he took office in 2008. The million-dollar slush fund created for his use and administered by the Community Foundation for Greater Buffalo was the brainchild of some of the same people who will be throwing money at him at the upcoming party.

Contributors to the "Building a Better Niagara Fund" were anonymous. They have never revealed themselves publicly, and Dyster continues to maintain the fiction that he has no idea who it was who wanted to give him the $1 million.

And if you believe that one, the mayor would like to interest you in the alleged ruins of a long-collapsed bridge where Harriet Tubman or Davey Crockett or Babe the Blue Ox or somebody once led 300 escaped slaves over the Niagara River.