I know some of you will find this a little hard to believe, but Niagara Falls Mayor Paul A. Dyster has a 10-foot-tall paper sign, written in crayon or colored markers, hanging in the main lobby at City Hall directly across from his office.

The sign appears written in a child's hand, or rather several children's hands.

It's been there for about a year.

The messages were written perhaps by second graders, possibly coached by their teachers.

The little tykes followed up with crayon commentary after the mayor apparently spoke to them someplace or another.

Addressed to "Dear Mayor Dyster," the large crayon sign contains many childlike comments, such as:

"We really appreciate all you do to make and keep our city safe."

"We appreciate how important it is to you to rebuild Niagara Falls."

"We enjoyed hearing your personal life story and journey to become mayor."

"We feel very protected by your efforts to remove weapons from the city streets that we like to play on." 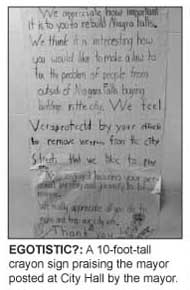 The kids -- bless their little hearts -- remembered everything: public safety, economic development, even the mayor's lofty rise to serve the people.

One of the themes -- that he made the city streets safer for children -- is perhaps somewhat disputable.

What is not in dispute is that the mayor made City Hall safer for himself.

The mayor of Niagara Falls stationed a police officer inside City Hall, close to his office -- not far, in fact, from the crayon sign.

While there may not be much crime inside City Hall, there is certainly plenty of crime on the streets outside.

According to www.city-data.com, the crime rate for Niagara Falls is almost double the national average. As of December 2010, there were 226 registered sex offenders in this city -- one out of every 407 people.

Crime has mushroomed in Niagara Falls during the Dyster administration, although that may not be his fault.

In any event, there were 83 police officers patrolling the streets. Now there are 82. One guards the mayor.

My favorite crayon praise on the mayor's sign is "It makes us feel safe knowing that you carry an emergency phone that keeps you connected to the city."

What I find amusing is not the sweet and childlike innocence of the sign, but that a grown man has it posted in the public corridors, where he and every employee at City Hall must see it every day.

Normally, an intelligent, dignified, mature man would have enough modesty and reserve not to put up a giant poster in praise of himself in the center of his workplace.

It says far more about him than the children.

After about a year of passing that sign, I got to musing. I know you'll find this hard to believe, but I'm not absolutely certain that the mayor himself did not write those messages with his own crayons and posted them where everyone could see them.

The next time you are in City Hall, go look at the poster. Doesn't it look a little like the mayor's handwriting?