He calls himself the "paving mayor," but Paul Dyster has done the worst job of maintaining the streets in the city's history.

Everywhere you go, you are in danger of hitting potholes and ruining your car, perhaps even losing your life. 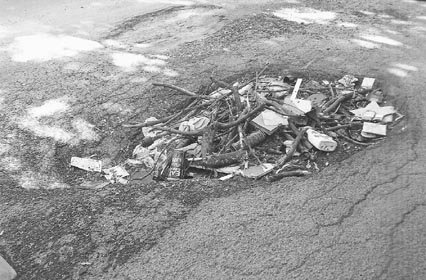 But maybe there is method in Dyster's madness.

Has the paving mayor brainstormed a twofer? Perhaps he should be commended rather than condemned for not fixing the thousands of potholes in Niagara Falls.

Potholes can be used as handy garbage receptacles!

As this picture of 16th Street between Cleveland and Niagara avenues suggests, residents can easily deposit their garbage in the nearest pothole, thus saving the city the expense of trash removal.

As he continually reminds us, Dyster is a card-carrying member of the high-IQ society Mensa, and thus prone to flashes of genius that would elude a dull, plodding mayor, who would simply pave the streets.

Kudos for thinking outside the box, Mayor Dyster!