In previous stories, we have given a lot of the credit to its president and CEO, Joseph Ruffolo.

He came on board in 2003. At that time -- and this is really the underbelly of any story related to its modern-day successes -- the hospital was suffering huge and significant losses. In the four years preceding Ruffolo's hire, these losses totaled more than $20 million. 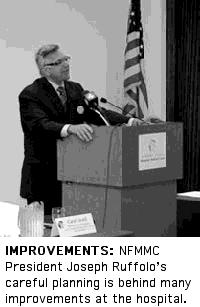 Since Memorial has no dedicated source of government funding, if losses had not stopped, the board of directors would have either have had to cut services or close the 116-year-old hospital. They chose instead to hire a man who could turn things around.

Ruffolo did. The hospital now not only breaks even -- but provides medical care for anyone who comes in the door -- regardless of their ability to pay.

Last year, the hospital provided some $6 million in what essentially was uncompensated medical service for indigent patients.

Apropos of this, for a long time people around here were conditioned to think of Memorial as only a safety-net hospital, one that serves mainly those who cannot afford to go to a better hospital where people with money go.

There are some who probably still think of Memorial that way. But Ruffolo, since taking over, did not make wholesale service cuts, as heads of other hospitals in economically challenged cities have done when faced with similar problems, but instead expanded, invested and brought in new revenue.

In spite of the high rate of poverty in this city, Ruffolo, with the help of a strong and dedicated staff of more than 1,000 employees, turned this hospital into arguably one of the premier hospitals in the country -- a cutting-edge hospital with a broad array of services and success rates rivaling big-money hospitals with affluent patients in affluent suburbs.

Some of the funding for the panoply of improvements came from borrowing. Much of it came from what some might call begging -- that is, fundraising. Memorial successfully applied for local, state and federal government grant funding, received grant support from several foundations, and engaged area residents and businesses in supporting galas, golf outings and other fundraising efforts.

Money was raised for a new state-of-the-art emergency room that provides care to 28,000 patients a year. They built a new state-of-the art inpatient behavioral health department to replace outdated facilities that were more than 30 years old. Memorial became a state-designated Stroke Center and kept up with the best technology and care-giving practices to keep that designation.

Perhaps one of the signal achievements during Ruffolo's tenure to date was the development of a Heart Center.

Following a landmark study that showed Niagara County -- out of 3,141 counties in America -- ranked No. 1 for deaths from heart disease, Memorial raised $20 million to create the Heart Center of Niagara and improve its emergency department.

To show the rather unconventional way Ruffolo sometimes gets things done, in addition to fund raising, to get the money, he arranged a loan secured by the National Automatic Sprinkler Industry Pension Fund, managed by Hartland Asset Management when more conventional bank financing was not available.

Interestingly, and most likely not coincidentally, the hospital's death rate from patients experiencing heart attacks dropped significantly after the heart center opened.

The investment brought to the Heart Center advanced and non-invasive diagnostic technologies. Memorial, it is believed, was one of the first in the country to have this kind of advanced heart diagnostics connected to its emergency room, making these technologies available 24 hours per day for suspected heart attack admissions.

They brought with them a team of six board-certified invasive cardiologists to work alongside Dr. Michael Merhige, Dr. Robert Neufeld and Dr. Eram Chaudhry.

To further illustrate the way Memorial operates -- merging good business practices with sound medical practices and consideration for the health needs of the community -- it might be instructive to briefly examine how Memorial went about planning and investing some $8 million in recent building, equipment and technology upgrades.

Many of these improvements are complete, and some are in process, the latest being sophisticated cardiac-monitoring equipment for the emergency department, intensive care unit and telemetry floors, and new fetal monitors for labor and delivery.

This latest round of reinvestment began in 2008, when the medical center commissioned a community healthcare-needs assessment for western Niagara County.

The board of directors and senior administration spent a full year prioritizing needs.

The result was an 88-point, three-year business plan approved in late 2009.

The goal, according to Ruffolo, was to create a "roadmap for transformation from a traditional safety-net hospital to a center for community health in collaboration with other providers."

Among some of the successes of this plan are: