TRADITIONAL POLISH CRAFTS BY ALICE WADOWSKI-BAK ON DISPLAY AT CASTELLANI

Niagara Falls is a city of immigrants. If America is the great melting pot, then surely the Cataract City is born from the liquid steel that is forged in the ovens of democracy.

Just about every building in the city was constructed with the blood and sweat of skilled European laborers. Our architecture, our culture, our language, the very fabric of our communities are all an amalgam of religions, customs and cultures that made their way here in the hearts and souls of immigrants. Our ancestors were simply men and women who often arrived with little more than the hope of a better life filling up the space of their empty pockets.

From this mass immigration sprang ethnic neighborhoods that embraced the customs of the old country, while they forged new identities in the new. One of the most prominent of these neighborhoods was the Polish section that took root in the 24th Street sector of the city's South End.

In that area, Polish immigrants established a neighborhood filled with the food, music, craftsmanship and art of the old country of Poland. In summer, the smell of fried pierogies slathered in sour cream wafted from open windows. Often, potato pancakes, known as placki kartoflane, and egg drops, called lane kluski, were prepared as side dishes.

The tuba-bass fueled sounds of polka filled the air. The gothic revival architecture featured in jewels of the old country like Blessed Bronislawa Chapel and Dzikow Castle found itself copied and re-imagined in the buildings erected in the Niagara Frontier. The neighborhood was as close as one could get to life in Warsaw without setting foot inside of Europe's ninth-most populous country. 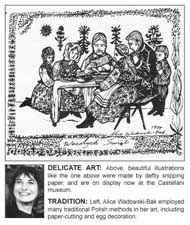 Pablo Picasso once famously said that art is just another way of keeping a diary. Alice Wadowski-Bak, who passed away in 2008, was the embodiment of that phrase as is born out by the viewing of a cross section of her work currently on display at Niagara University's Castellani Art Museum.

The exhibit, titled "THROUGH POLISH-AMERICAN EYES: THE ART OF ALICE WADOWSKI-BAK," premiered Sunday, March 27, with a reception that featured much of that traditional Polish food and music, along with a healthy dollop of Old World lore. It runs through Nov. 27 and can be seen daily during normal museum hours.

Guest curator Valerie Walaweneer, with an assist by Wadowski-Bak's cousin Patricia Frederick, has put together a multi-medium feast for the eyes that showcases the artist's talent by putting the spotlight on the heart that beats through her most important works.

"My mother was very religious, down to earth, and had a warm personality," her son Ken explained. "I think that shines through in her art. People feel connected to her when they come into contact with the art she left behind."

That is evident just by watching the faces of gallery goers as they interact with the many types of artwork on display. Among the disciplines featured are: wycinanki (traditional Polish paper cutting), pen and ink illustrations, paintings and pisanki (written eggs).

The wycinanki, in particular, detail Wadowski-Bak's innate ability to layer deep meaning into her work using the technique of positive and negative space. What at first catches the eye due to the deft hand of the artist soon gives way to awe for the deep ruminations of the heart that guided the hand.

Wadowski-Bak's work has been seen in exhibits at the Albright-Knox in Buffalo, the Boston Institute of Contemporary Art, and the Pittsburgh Center for the Arts. However, never before has it been celebrated in the way that it is at the Castellani exhibition.

To accompany the gallery feature, workshops will be offered to tutor aspiring artists in the nuances of trraditional Polish folk art. On April 10, Polish paper cutting will illustrate how scissors can be just as precise as the brush in the hands of a skilled artist. The cost for the workshop is just $5, and pre-registration is advised.

Locally, Wadowski-Bak is probably best known for a collage of local attractions that was made into a widely distributed poster in the early '90s. Internationally, she is known as the artist of the critically acclaimed "Wigilia." The elaborate painting depicts a rustic home where an extended Polish family is celebrating the Christmas Eve tradition referenced in the work's title.

A big fan of Wadowski-Bak's work was the late actor Vincent Price. According to Ken Bak, Price owned many of his mother's works and used an intermediary to make the purchases. It is interesting to note that an actor celebrated for the macabre was so drawn to an artist who was embraced for her philosophy that giving is the greatest gift a person can offer others and the world.

Wadowski-Bak grew up on 23rd Street and Ferry Avenue in Niagara Falls. She attended Holy Trinity and the Holy Rosary High School. That childhood instilled in her virtues that she later explored in her art.

Wadowski-Bak's understanding of Polish tradition led her to explore the relationships between man and myth, spiritual and earthly realms, the human family and one's own family.

Her work is proof that the immigrants who settled here may have left family and possessions behind in the Old World, but they brought the tradition, customs and culture with them, and blended it all into the tapestry of Niagara's America.

Do yourself a favor and make a point of getting out to see Alice Wadowski-Bak's exhibit while it is at Castellani. Just for a moment, you'll feel as if you've left Lewiston and are in Lodz.

Don't be surprised if you leave the exhibit in tune with the saying depicted by Wadowski-Bak's wycinanki piece "Wszystkie Stare czasy saţ dobre," meaning, "All old times are good."