The Tuscarora "Gang of Four" that has already sucked up $12.5 million in settlement money from the New York Power Authority also has another patron, the federal Environmental Protection Agency, it was learned last week.

Documents made available through a federal Freedom of Information Act request show that the Tuscarora Environment Program (TEP) -- a private company controlled by Neil Patterson and his son, Neil Patterson Jr. -- has raked in a total of $215,640 per year under an agreement with the EPA. 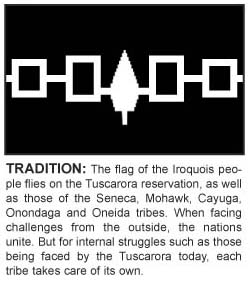 Additionally, cash amounting to about 30 percent of the $215,640 cash award to TEP is provided to cover Social Security, Medicare, state and federal unemployment, health insurance, retirement and Workman's Compensation for each employee.

Ironically, the Pattersons are using at least some of that cash to put out a monthly publication, Skaure, which has recently taken up the cause of justifying the handling of the $12.5 million Power Authority settlement money by the Pattersons, tribal clerk Leo Henry and attorney Kendra Winkelstein of Grand Island.

An article written by Neil Patterson Jr. and carried in the newsletter's October edition is titled "Relicensing Update," as though there had been any reporting on the settlement agreement by the leadership in the first place.

Under the EPA agreement Patterson Jr. is paid $39,000 a year plus benefits.

"The Tuscarora Nation has received over $12 million from the New York Power Authority to date," Patterson tells his readers. The fact that the exact figure -- $12,484,752 -- was first uncovered in a Niagara Falls Reporter article back in May seems lost on him.

"Each month the Nation purchases one megawatt of low cost power from the Niagara Project and distributes the benefit to 130 eligible homes on the Nation," Patterson writes. He fails to mention that one megawatt of power is enough to supply 1,000 homes with electrical power or that all of the 376 households on the reservation are eligible for the benefit under the terms of the settlement agreement.

Perhaps he realized that bringing those issues up would make it even more difficult to explain why the Tuscarora leadership has denied so many families on the reservation the right to have any sort of electrical power delivered to their homes over the years. Denial of landline telephone service and denial of treatment at the publicly funded Tuscarora Health Clinic are two other punishments meted out by the "Gang of Four" to those they think are of questionable loyalty.

Even the article's opening sentence contains an untruth.

But Clan Mothers contacted last week said they had never been to a meeting where the settlement was discussed. Like everyone else, all they knew about it was what they read in the Reporter.

In reality, the entire Tuscarora negotiating team consisted of the Pattersons, Henry and Winkelstein, and even a "finance committee" set up in 2007 was unaware that the Gang of Four had already accepted a $5 million payoff and agreed not to require an environmental impact statement called for in the EPA's original project specifications.

Why would officials of a company called the Tuscarora Environmental Program decide that no environmental impact statement was needed for a project that affects every man, woman and child on the reservation? Could the payment of $5 million two years prior to the signing of the agreement have anything to do with it?

Sources in Albany told the Reporter last week that state Attorney General Eric Schneiderman would be coming to Niagara County in November to announce the launch of an investigation into these and other questions.

Perhaps then we'll find out how much the Pattersons, Henry and Winkelstein are paying themselves to hold "council meetings" at the Pattersons' personal residence. Or how much certain tribal members have received in the form of white envelopes containing checks marked "For Loyalty" on the memo line.

The Pattersons, Henry and Winkelstein seem to believe that what they're dealing with is essentially a public relations problem, best dealt with through cash payments, providing services they should have been providing all along, and insipid attempts at a pretend transparency they've seen no need to provide in the past.

What they really have is a serious legal issue, one that involves federal and state funding, federally insured banks off the reservation, agreements signed in Albany and Washington, D.C., and, especially in Winkelstein's case, no obvious sovereign immunity.

What they are facing is a full-blown class action lawsuit, soon to be filed by prominent Niagara Falls attorney John Bartolomei and based on the civil RICO statute, alleging the Tuscarora leadership to be a criminal organization.

On top of that, Schneiderman's investigation could well result in the suspension of payments by the state Power Authority. On top of that, a federal investigation into fiscal improprieties, civil rights violations and human rights abuses could take matters to the boiling point.

Perhaps, sometime in the future, checks made out to the Tuscarora Nation of Indians will not be delivered to the homes of the Pattersons and Leo Henry. Maybe someday, every enrolled member of the Tuscarora Nation will have low-cost electrical service, health care at the tribal clinic -- and some say tens of millions of dollars will roll in to the nation's coffers over the next 47 years.

That'll be a good day for everyone.