DOWN IN MERIDA, A CHANCE TO GET LOST AND FIGURE OUT WHAT REALLY MATTERS

MERIDA, Yucatan -- Sitting under the bamboo trees in the old stone courtyard by the pool, it's easy to imagine that the world you left behind doesn't really exist, that New York and Los Angeles and Niagara Falls were just figments of your imagination, dreams and nightmares conjured up on a restless night following a particularly stressful day. It's been days since I've heard English spoken, conversational English anyway, as the people here can speak a form of it that I suppose sounds as foreign to my ear as my own attempts at Spanish sound to theirs.

It would be easy to get lost in Merida.

We set up shop at the Maison Lafitte, an old hotel in the heart of the centro historico -- the old walled city -- close by the old cathedral, the most beautiful and ancient cathedral in North America. Completed in 1598, it was built under the direction of a conquistador named Francisco Montejo, who used limestone building blocks fashioned centuries earlier by the Mayans for use in their temple pyramids.

Religion is everywhere here, a curious mix of Catholicism and the old Mayan beliefs, with the saints taking the place of their many deities and the old cult never too far beneath the surface. The cathedral itself occupies the site of an ancient temple where blood sacrifice was practiced, and the exterior walls of the church still bear hieroglyphics and the grotesque images of the Mayan gods carved a thousand years ago. 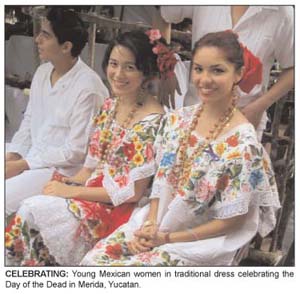 We'd come to Mexico for Dia de los Muertos -- the Day of the Dead -- a holiday kind of like Halloween, Christmas and the Fourth of July all rolled into one. Everywhere there are images of Catrina, the Elegant Skull, a large-breasted woman dressed in fine clothes and a death's head, and in the central plaza a hundred workmen were building palapas huts to house the souls they believe will walk the earth. Offerings of food and mescal.

On the flight down, the Redhead showed she was already getting into the spirit. When the stewardess informed us that, in the event of an emergency, the crew would distribute additional lifesaving devices for children weighing less than 35 pounds, she laughed.

We came down on Wednesday knowing that Hurricane Rina was poised to hit the Yucatan the following day. The news coverage was nearly hysterical in tone, evoking the spectre of Wilma, the deadly 2005 hurricane that devastated Cancun, Cozumel and the rest of the Mayan Riviera. It promised to be a great adventure but Rina fizzled out near Cancun and all we experienced was a cloudy afternoon and a few drops of rain. Still, the hotel was largely deserted by the easily frightened touristas and it was quiet and peaceful. We had the place pretty much to ourselves.

You can't talk about Mexico without talking about the war that has claimed 45,000 lives since President Felipe Calder—n first sent troops in the field on Dec. 11, 2006. Two years ago, when we were in Quintana Roo, there were heavily armed troops everywhere and checkpoints manned by nervous young soldiers were commonplace. There is still heavy fighting going on in the north and west but in Merida the war seemed as abstract and unreal as the cities you left behind.

Still, when heading into any potentially dangerous situation, I believe in dressing well. I wore the vintage brown sharkskin suit I'd picked up on Hollywood Boulevard two weeks earlier and a pair of woven leather Ferragamo loafers. It was actually much too hot for a suit and after we got to the hotel I abandoned it for a sport shirt and jeans, the better to stroll the sun-baked streets.

Despite the war and the crushing poverty, the modern Mayan people who populate the city are friendly and seem happy, unlike many relatively well-off people back home. There is little talk of politics, the economy or anything else that Americans are so preoccupied with, and there's a sense that those humorless distractions don't really amount to much in our everyday lives. Just getting through the days, eating simply but well and enjoying those you love seem far more important here.

Maybe because their culture is so old and ours is so young, the Mayans have figured out what really matters in life and have set their goals accordingly. Maybe laughter, the joy of family and a fatalism that causes one to live for the day are what life is really all about. Love and the expectation of love. Happiness.

Back in the States, Republicans are fighting Democrats, poor people are hating the rich and, no matter how much money they have, people are stepping all over each other in an endless quest for more. Here in Merida, on the eve of Dia de los Muertos, the mood is festive, the thought of going back seems insane.

A beautiful young girl, perhaps 12 years old, swims across the pool and calls out to her mother, who is watching her from a chaise lounge poolside. They laugh together and a waiter brings out a tray of drinks.